The Wembley stamp is one of my favourite stamp designs and introduced me to the work of Harold Nelson. Here’s a brief history of the design and some amazing illustrations by the artist himself.

Up until 1924 Great Britain had not produced a commemorative stamp (a stamp to celebrate an event or occasion), however it was suggested that two stamps be produced for the British Empire Exhibition in 1924. The King supported the idea only if a committee was selected that was competent to produce a successful stamp design. The committee consisted of the secretary of the GPO, members of different museums/schools of art and a representative of Buckingham Palace.

8 artists were asked to submit designs, where they had to follow certain guidelines such as; the denominations had to be 1½d or 1d, ‘British Empire Exhibition 1924’ had to appear and the design needed to be symbolic of the British Empire.

Batten only submitted one design that depicted Britannia holding a trowel after laying a foundation stone baring the title. She is also wearing a naval crown and an anchor can be seen in the bottom left corner. 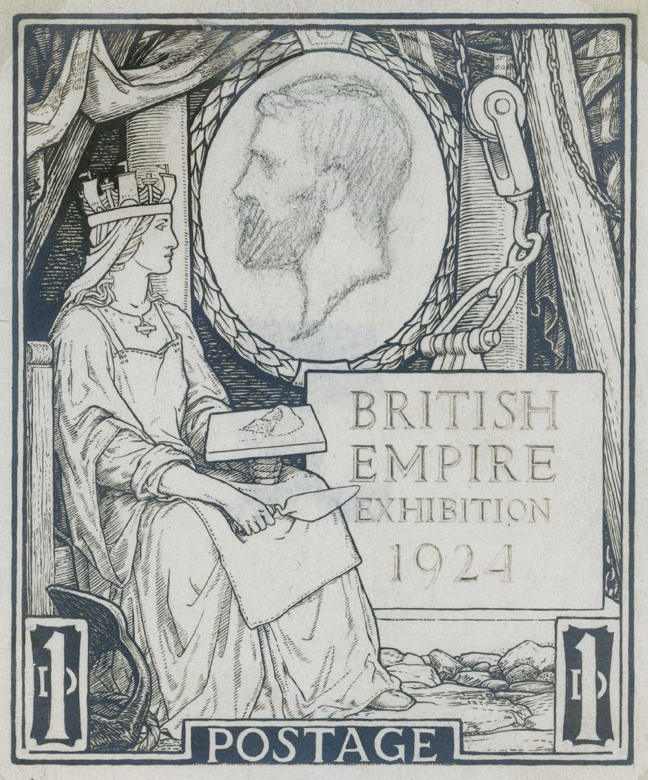 Tristram submitted three designs, here focusing on a reclining Britannia holding a Union Jack shield and trident. In each corner of the landscape design you can see an animal that represents a part of the colonies. Mable leaf = Canada. Elephant = India. Kangaroo = Australasia. Springbok = Africa. 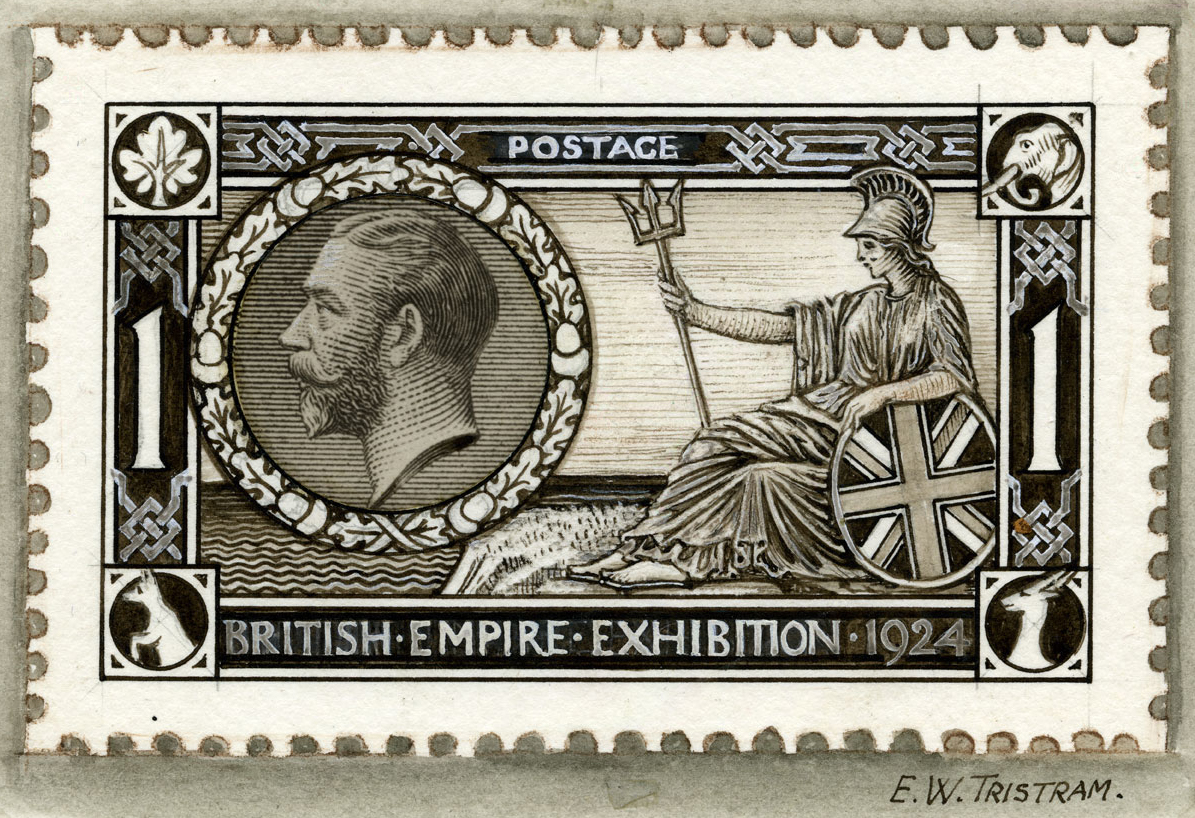 Rooke used a similar stylistic approach but here he also acknowledges Britain, using a rose for England, Thistle for Scotland and the Shamrock for Ireland. Interestingly there is no daffodil for Wales which one would have expected to be used. 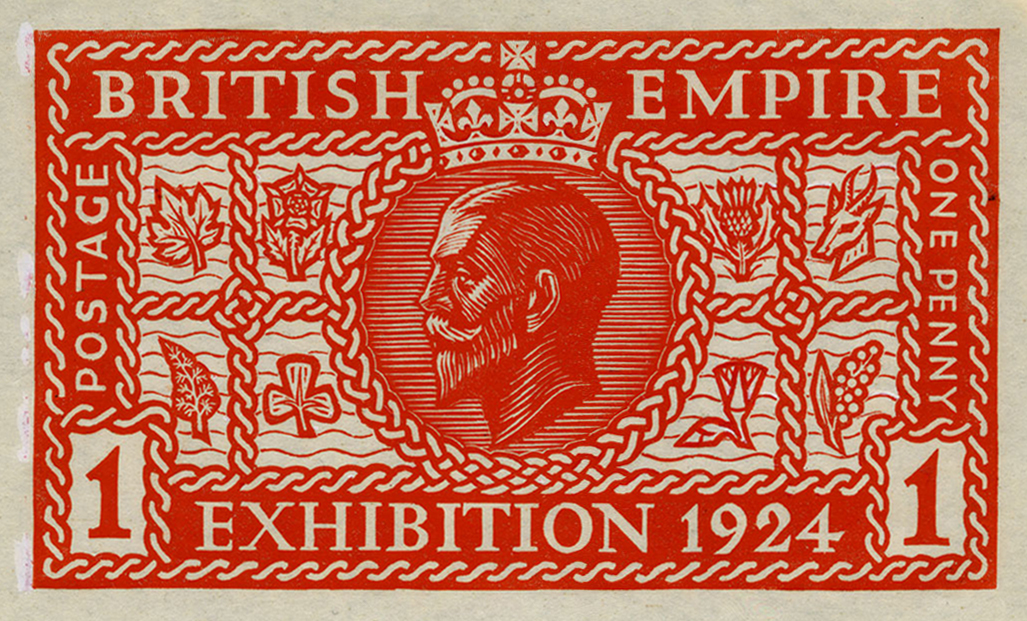 These are two alternative designs submitted by Nelson that were not selected, they refer to the British dominance over the sea with the inclusion of boats and dolphins. 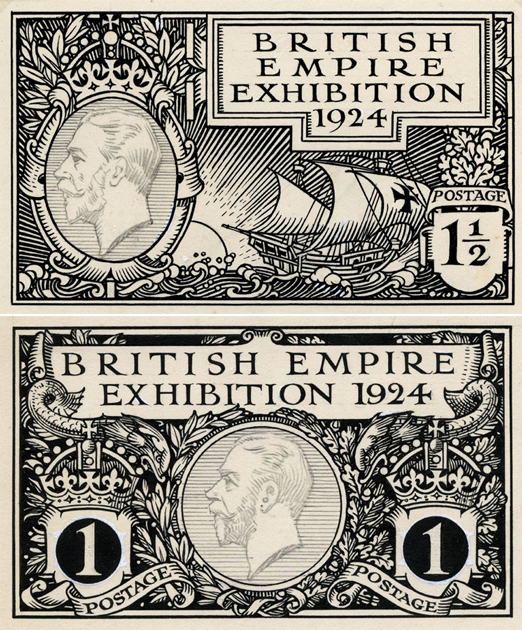 After reviewing the artwork the committee decided on the lion design by Nelson and the predominantly topographical design by Eric Gill, shown below. They both were asked to make some alterations to their designs and resubmit their work. 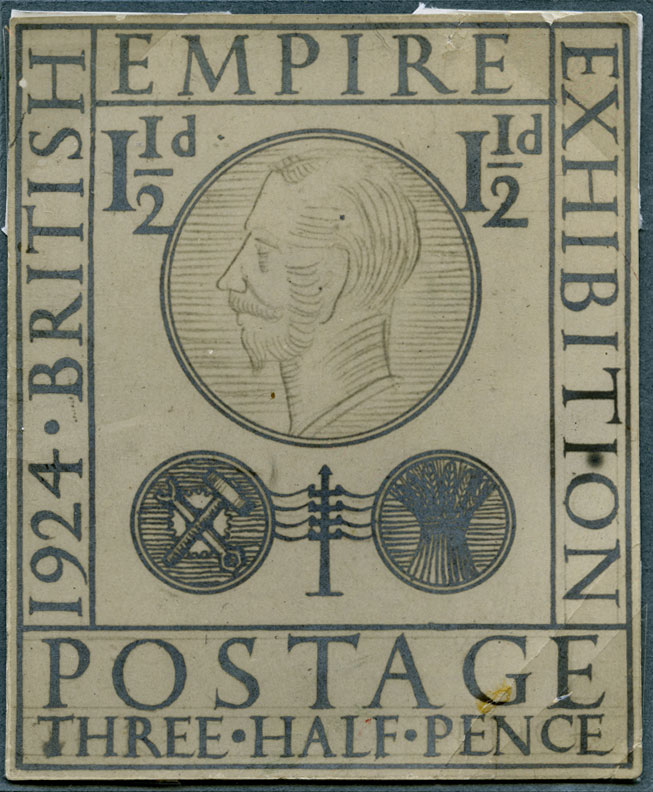 As you can see from left to right the landscape the lion is standing on has changed. Nelson was asked to place the lion on land rather than at sea. You would expect a lion to be stood on land but again this was a stylistic decision to show British naval dominance.

Before and after alterations, Harold Nelson, Jan/Feb 1924

The King was very pleased with Nelson’s lion design but did not approve of Gills work. Instead he admired Nelson’s other submission of St George and the Dragon. However, this would mean giving both designs to one artist and instead it was decided to use the Lion piece for both values. It later became common place for one artist to produce all designs in a stamp issue.

Nelson’s St George design would later be used in 1929 to commemorate the London Postal Union Congress. 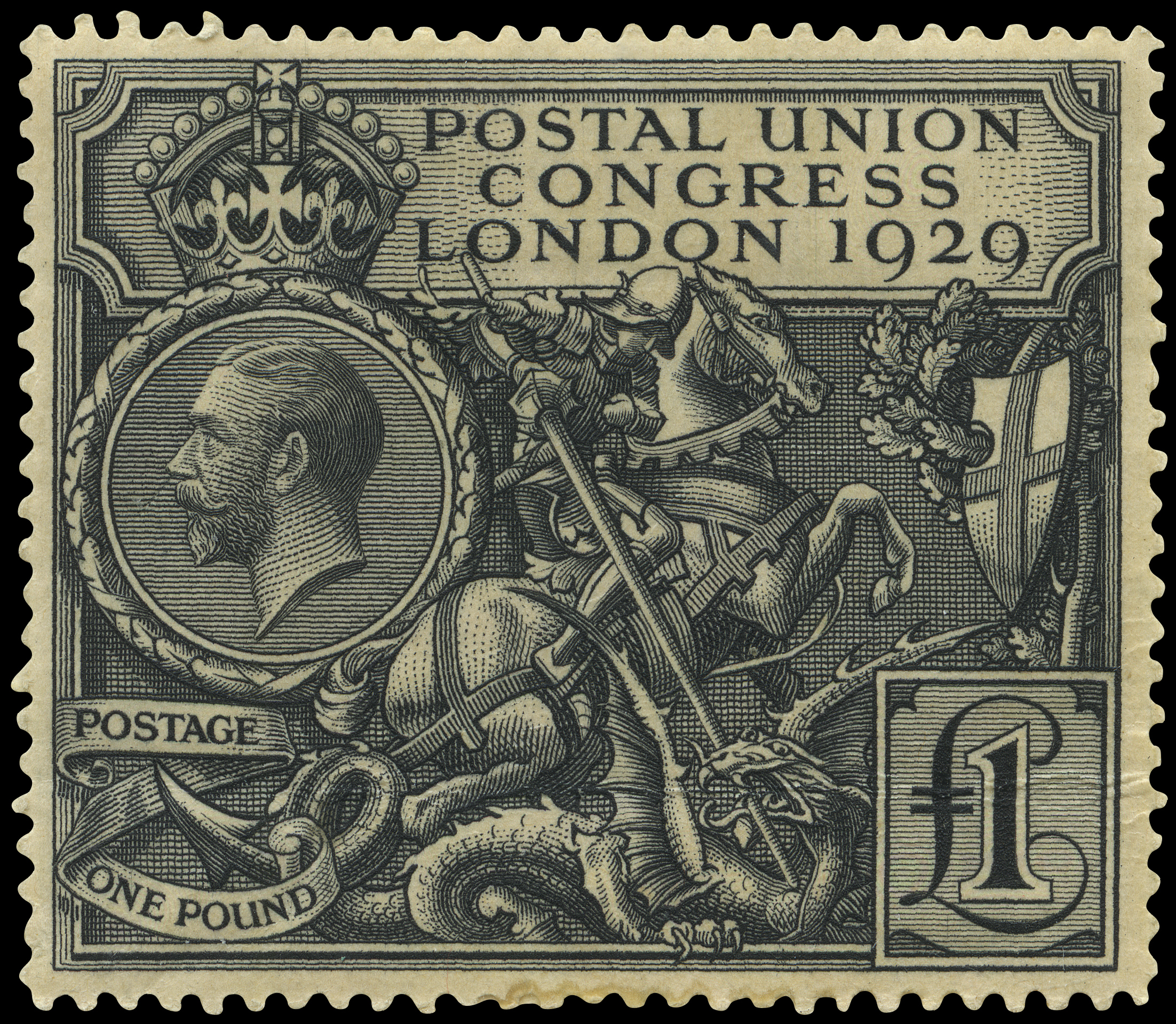 Over 15 million stamps were produced by Waterlow and Sons to celebrate the exhibition becoming our first commemorative stamp. I hope you agree there is true beauty in Nelson’s work that started a great history of British commemorative design.