Assistant Curator Jessica is fascinated by our weapons collection - but why do we have one? Why did the mail need guns?

In the 18th century travel was hazardous to all. Highwaymen stalked the roads and those leading into London were said to be ‘infested’ with robbers. Romantic tales of masked, gallant gentleman were far from the truth: highwaymen were ruthless and deadly. 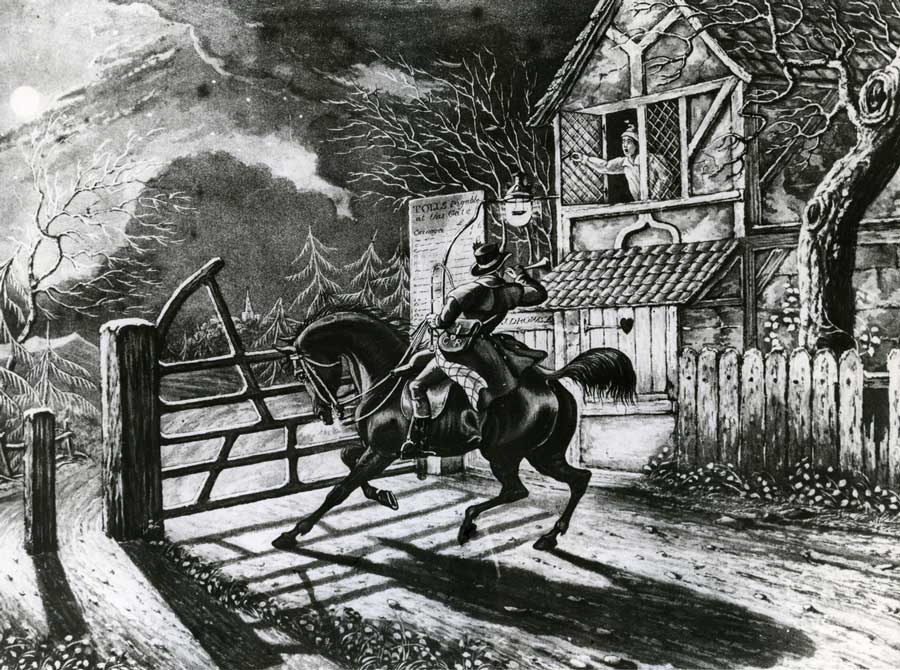 On 4 December 1775, a Norwich stagecoach was attacked by a gang of seven highwaymen. The guard shot three robbers before being killed and the coach robbed. Richard ‘Dick’ Turpin, a famous highwayman of the time, was known to torture his victims and would even kill one of his companions to aid his own escape.

‘… recommending the Guarding of all the Horse Mails, as a measure of national importance to which the Public in some degree conceived themselves entitled…’

A plan was written to guard all horse mails, which included the arming of all guards. In doing so the Post Office would not only secure the vast property conveyed by horse, but also save the expenses incurred in prosecuting a robber. Furthermore, it would maintain regularity of service and eliminate what was seen as a disgrace to both the Office and to the nation.

Surveyors observed that the revenue lost to robbery was twice the sum it would cost to guard the mail: it was the obvious choice. 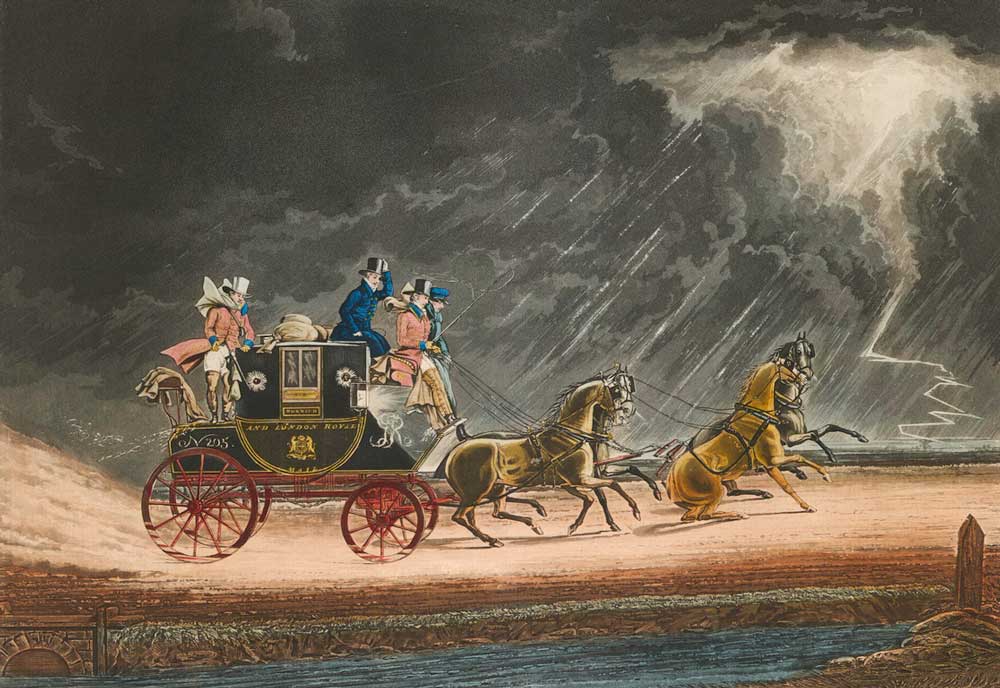 In 1784, John Palmer introduced the first mail coach from Bristol to London. This faster and well-armed postal service proved to be a great deterrent to robbers, as they risked being shot or, if caught, tried and hanged. The first recorded robbery of a mail coach did not occur until 25 July 1786.

A letter to joint Postmaster Generals asking for the establishment of a regional mail coach was signed by over 100 people, whose businesses had been damaged due to the frequency of robberies. Mail coaches were a better way of securing the post’s safe passage, though there are a few recorded instances of attempted robberies even of them.

In January 1816, an Enniskillen coach was attacked and robbed by a gang of 14 men who had barricaded the road. The guards fired off all of their ammunition but the mail bags and weapons were all stolen.

The chances of hitting the target with a pistol were small, so a popular choice for Mail Guards became the blunderbuss, an intimidating weapon good at close range. Royal Mail began using blunderbusses in 1816, loaded with 10 or 12 shots ‘the size of a pea’ and a small amount of powder.

Some blunderbusses like the one in our collection featured a bayonet, held in place by a clip with a strong spring that would sweep forward and lock into position, allowing the guard to thrust it quickly at the attacker.

Along with a blunderbuss, the Mail Guard was issued with a a pair of flintlock pistols. We know little about the system in which they were ordered, issued and numbered, but engraved around the muzzle of our collection’s blunderbuss is ‘FOR HIS MAJESTY’S MAIL COACHES’. They also often featured the number and gun maker. The wording of the engraving was not standard and not all Post Office issued weapons were marked. 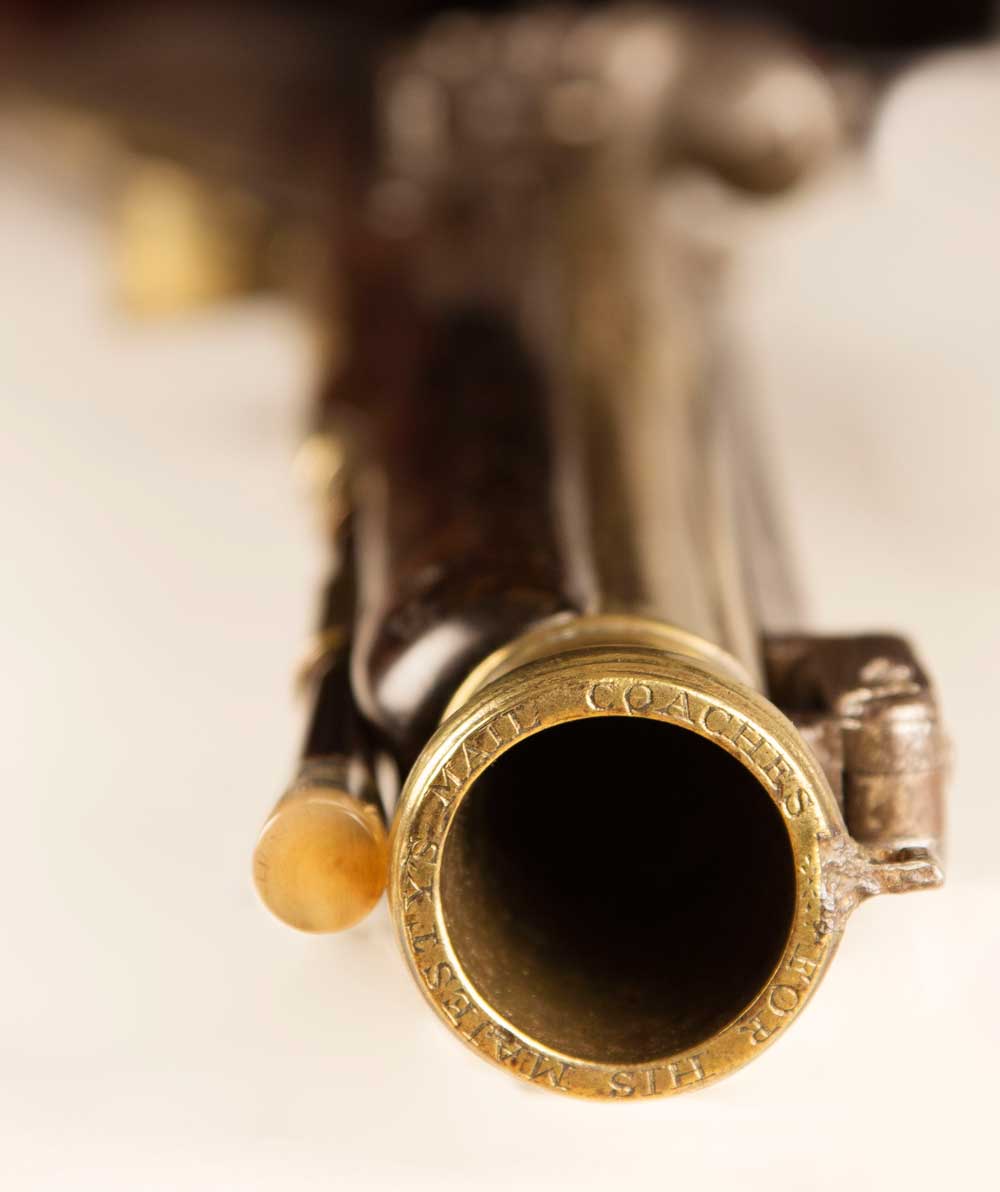 In 1793 Thomas Hacker reported after inspection that many weapons had been forgotten, lost or were in poor condition. In 1816 it was reported that too many accidents were happening. The journey must have been dull at times and a turnpike, swinging inn sign or mail post was a tempting target, and so a fine of £5 was made for any firing of arms that was not in defence of the property or passengers.

‘… use the utmost vigilance to compel the Guards to keep their Arms in a clean and proper state fit for defence of the important property they are trusted with.’

Francis Freeling to the Surveyors

The lawless character of the 18th century promoted the development of the ‘pocket pistol’, a weapon that suited the increasingly popular style of fitted pockets in garments. It would have been easy to conceal, proving useful if attacked. Our collection’s pocket pistol has limited provenance, but what we do know suggests it was carried by a Post Boy. 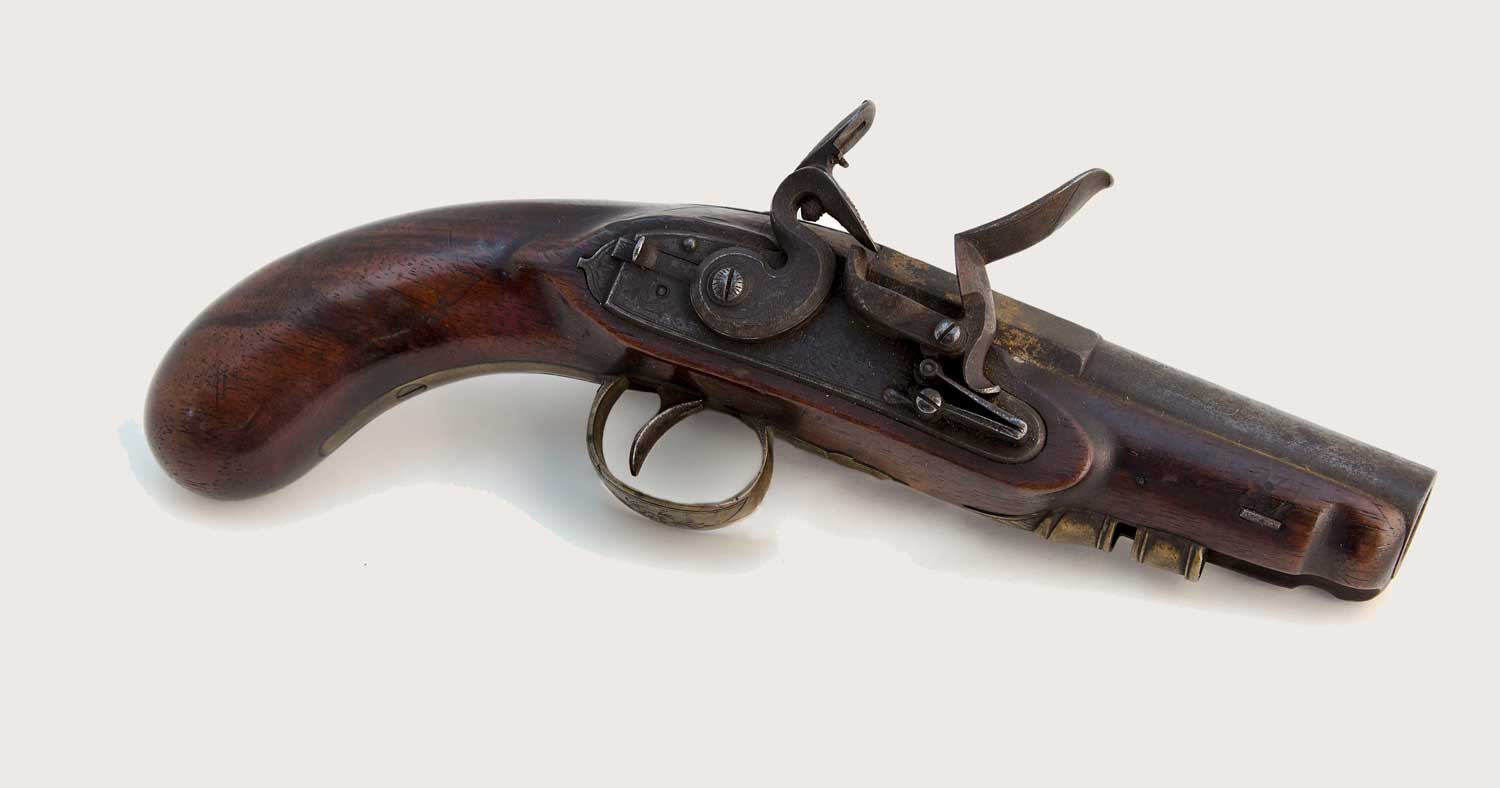 Robberies of Post Boys were common; they were often young and unarmed. Two of the most brutal robberies took place in September 1791 when a post boy, James Hogworth, was murdered one mile from Warrington, and in October 1816 when a post boy was assaulted ‘in a most desperate and inhuman manner’ near the village of Aplington, leaving him unable to work.

In 1797 the theft of £100 was committed by a 12-year-old Post Boy. This not only highlighted that some were underage, but also the value of material carried by the post. Freeling wrote suggestions to improve and protect Post Boys, including raising the minimum age to 18, ensuring that all were of good character, providing them with arms and giving each a strong cap to protect their heads. 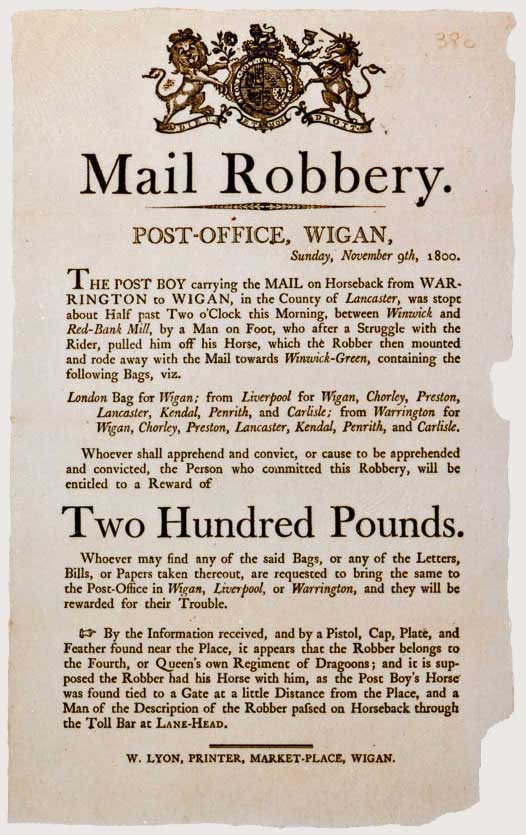 As railways spread across the country, the last mail coach left Manchester in 1855. Mail Guards remained employed under the 1838 Carriage of Mail Act, which stated that a railway could only carry mail if accompanied by Mail Guards, but by 1848 this was lifted and railways could employ their own. 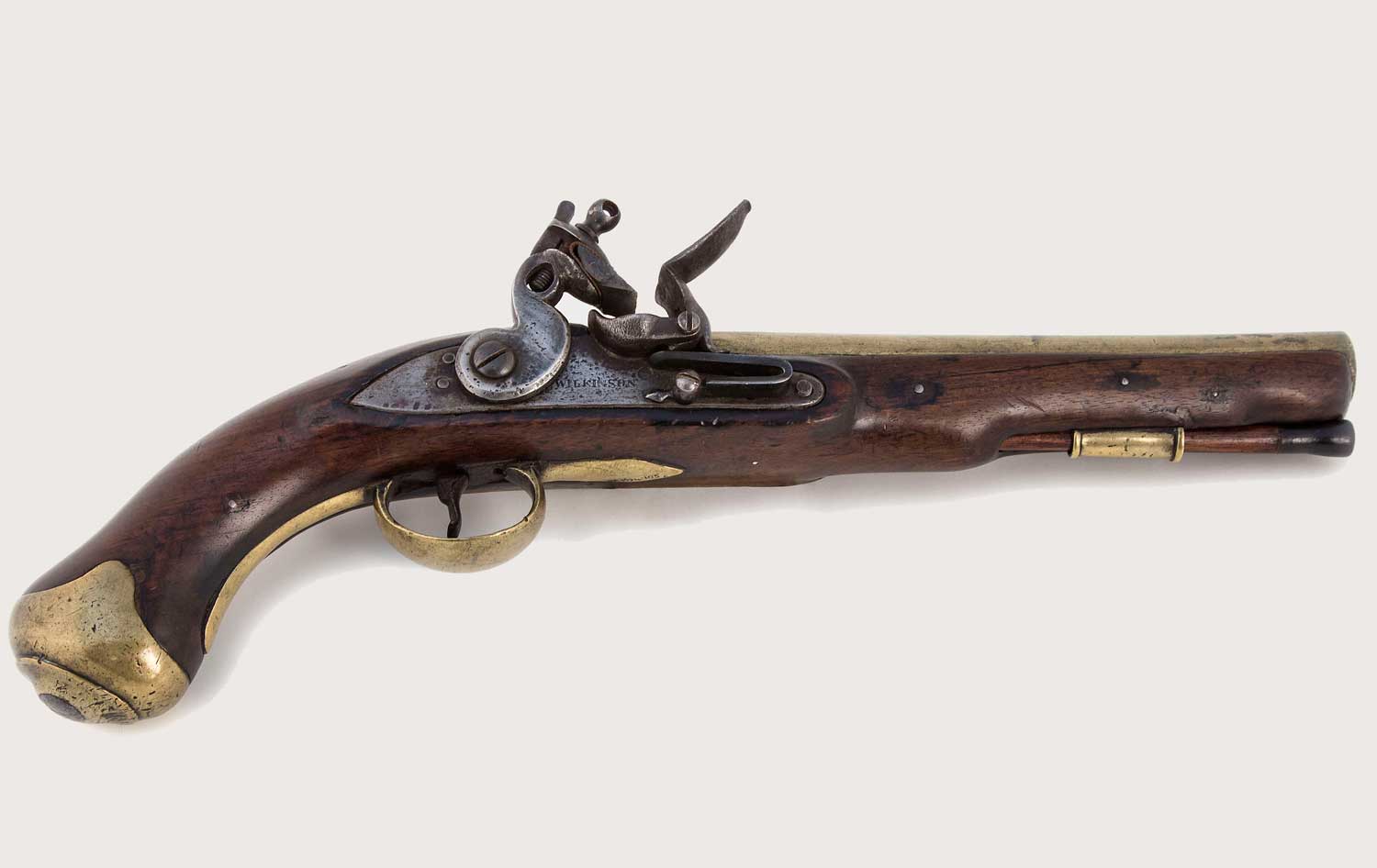 Weapons were not only used on the roads to protect the post: overseas mail was carried by packet ships, small fast vessels which, like their crews, were well armed. Henry Nocks, a well-known gun maker in London, supplied many pistols for these voyages like the flintlock pistol pictured above.

However, packet ships proved too expensive for the Post Office, and in 1836 service was transferred to the Admiralty. Armed Mail Guards began to disappear.

Want to see the real thing? A selection of fine weapons is on display in the museum!