Tickets
The Postal Museum blog The Iconic Ashes in 3D

Making of 3D Model of the Iconic Ashes Urn

Go behind the scenes at our Digitisation Studio.

In Autumn 2017 we welcomed staff from Marylebone Cricket Club (MCC) Museum and, as part of their tour, they visited our Digitisation Studio, a purpose-built facility to digitise the museum’s rich collection of objects and archive material.

In recent years studio staff have been experimenting with an imaging technique known as photogrammetry.

By taking many photographs of an object from lots of different angles, a computer program can be used to analyse the photographs in detail and then create a 3D computer model of the object. We’ve used this technique to create a number of 3D models of objects in our collection.

As part of the mutual knowledge-sharing between the museums, we agreed to use our digitisation studio service to create a 3D computer model of the MCC Museum’s most iconic object – The Ashes Urn.

History of The Ashes

For 137 years, England and Australia’s cricket teams have competed for ownership of ‘The Ashes’. The series of matches is so named following England’s unexpected defeat to Australia in the summer of 1882.

A mock obituary in the Sporting Times stated that the body of English cricket would be cremated, and its ashes taken to Australia.

A mock obituary in the Sporting Times, 1882

During the next test series, played in Australia in the winter of 1882-1883, a small ‘urn’ was presented to the English captain, Ivo Bligh, as a personal memento. Over the years, this urn has become imbued with the romance of one of the oldest sporting rivalries in the world.

After months of careful planning, the Ashes Urn was brought to The Postal Museum in June 2019 for digitisation.

‘This is the first time in 13 years that the Ashes Urn has left MCC Museum and it always travels under the strictest security. It’s really exciting for us to bring it to The Postal Museum.’

The Ashes Urn is about 6 inches tall. To capture it in detail, the museum used a 100-megapixel Phase One XF camera. Andrew Bruce, then Digitisation Officer, carried out the digitisation, taking 6,146 photographs of the urn from many different viewpoints. Photography took two days. 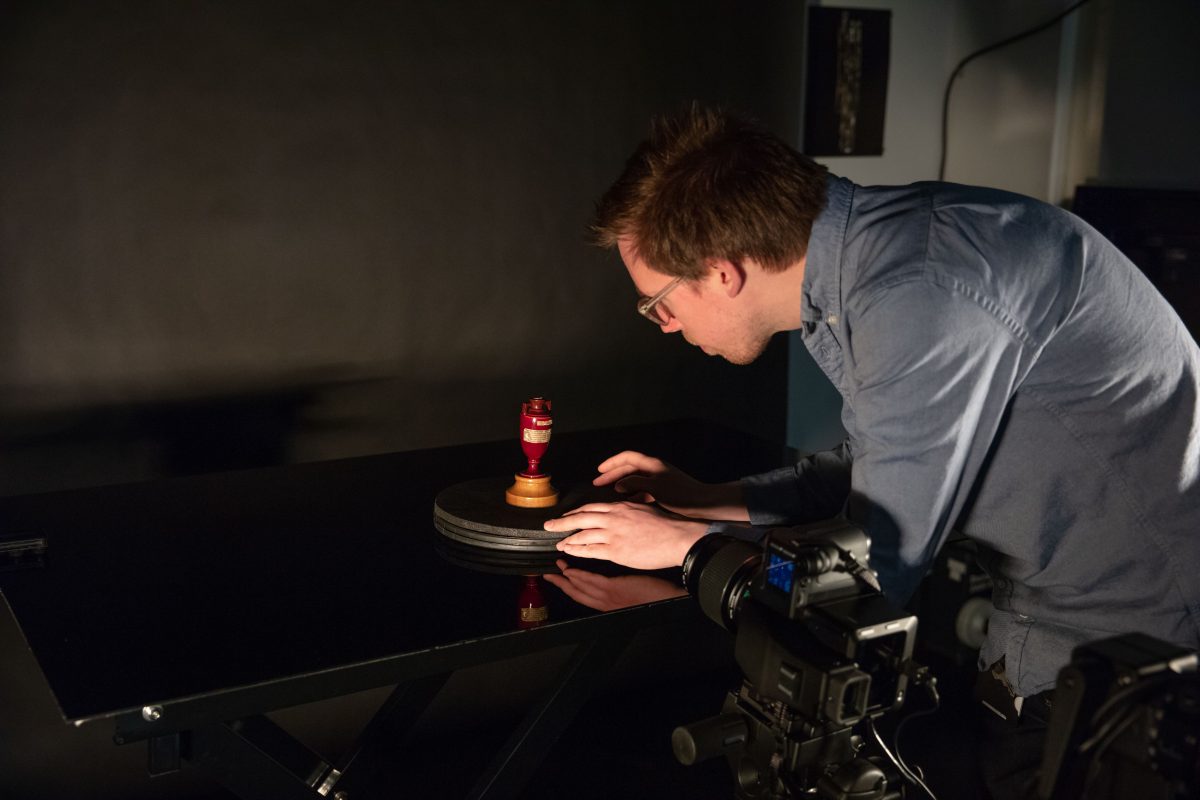 Photographer, Andrew Bruce, adjusts the position of the urn on its turntable

These photographs were fed into a computer program which examined each photograph and mapped the details to produce a 3D model. 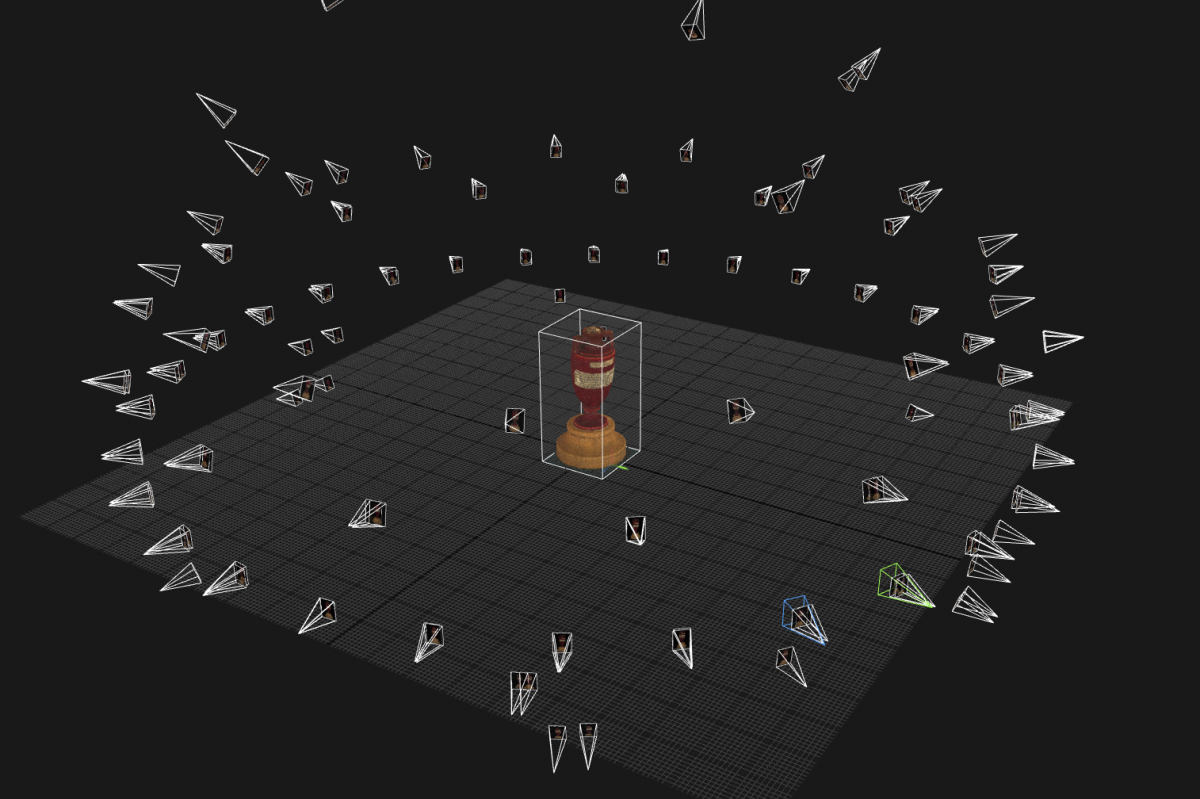 Model of the urn in 3D space, with each photograph used to create it represented by a prism 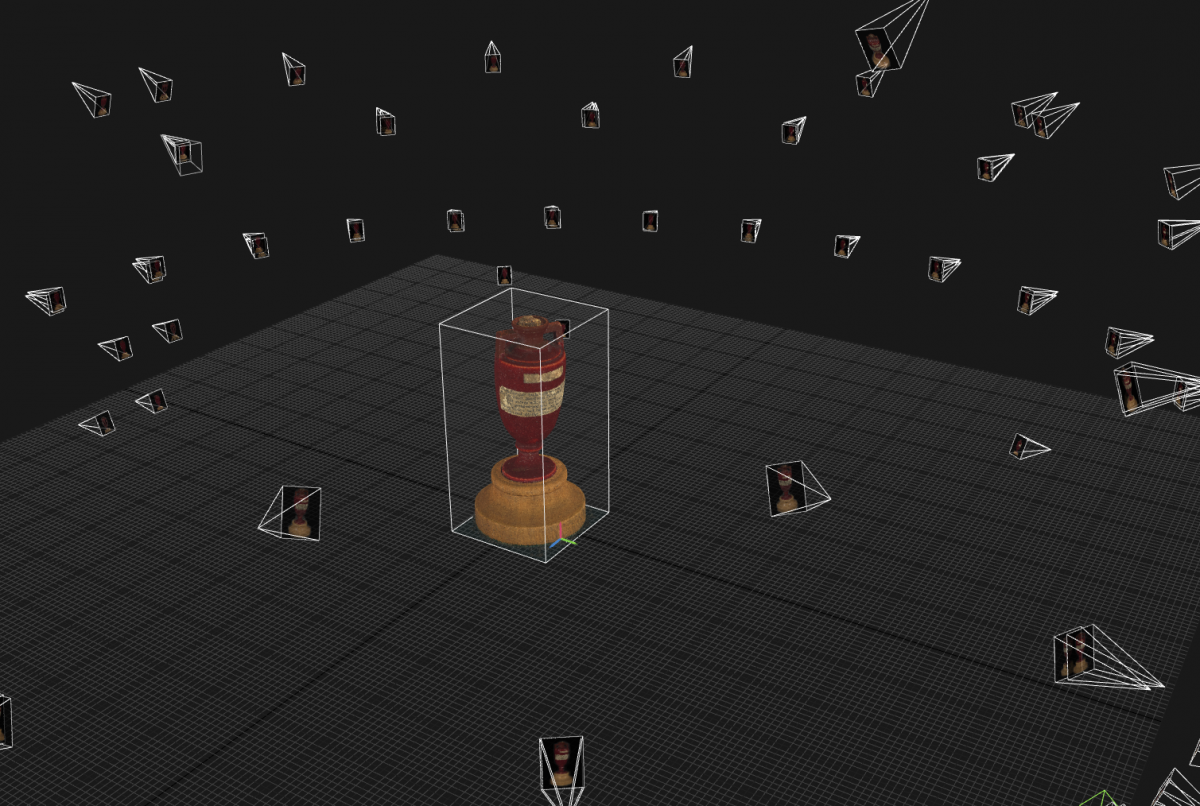 While the photogrammetry program was able to create a very good 3D reproduction of the urn’s shape, extra-help was needed to improve the details of the urn around its cork and to map the surface texture. Thomas Flynn, Cultural Lead at Sketchfab fine-tuned the model and refined the surface properties to match the real urn. 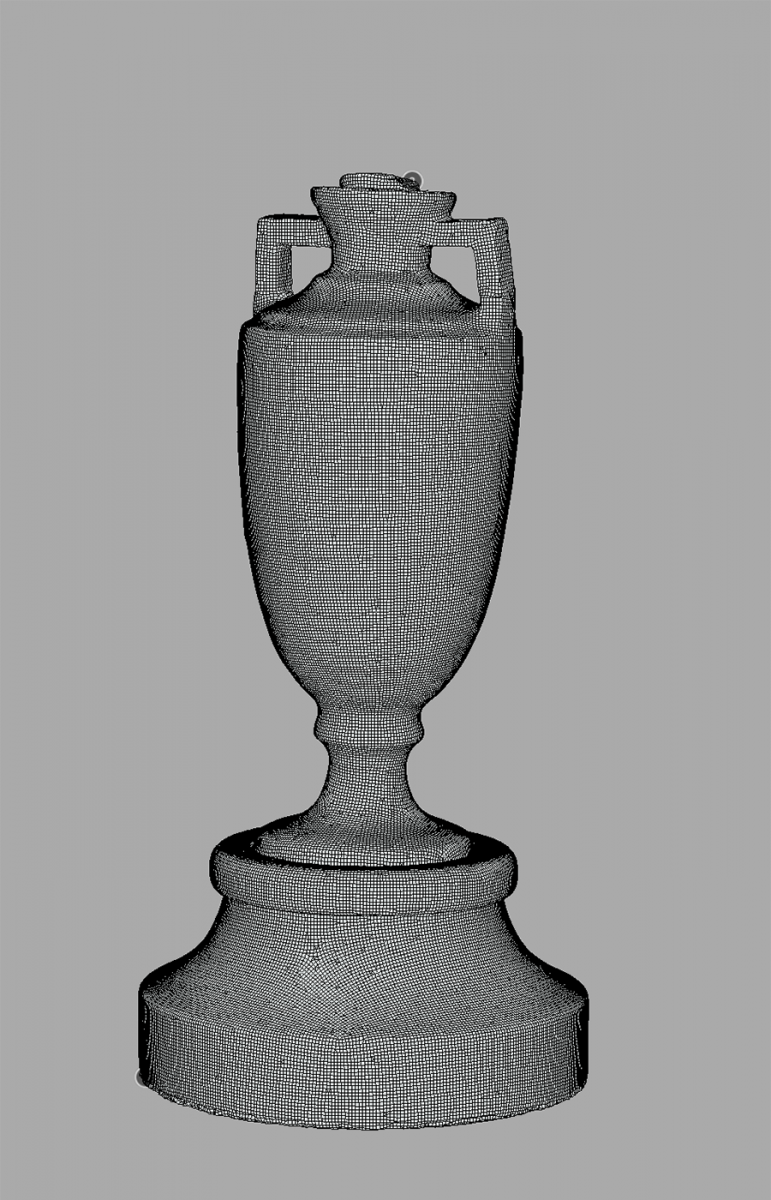 The wireframe mesh of the 3D model of the Urn. The model is made of millions of tiny triangles, fitting together to represent the surface of the urn 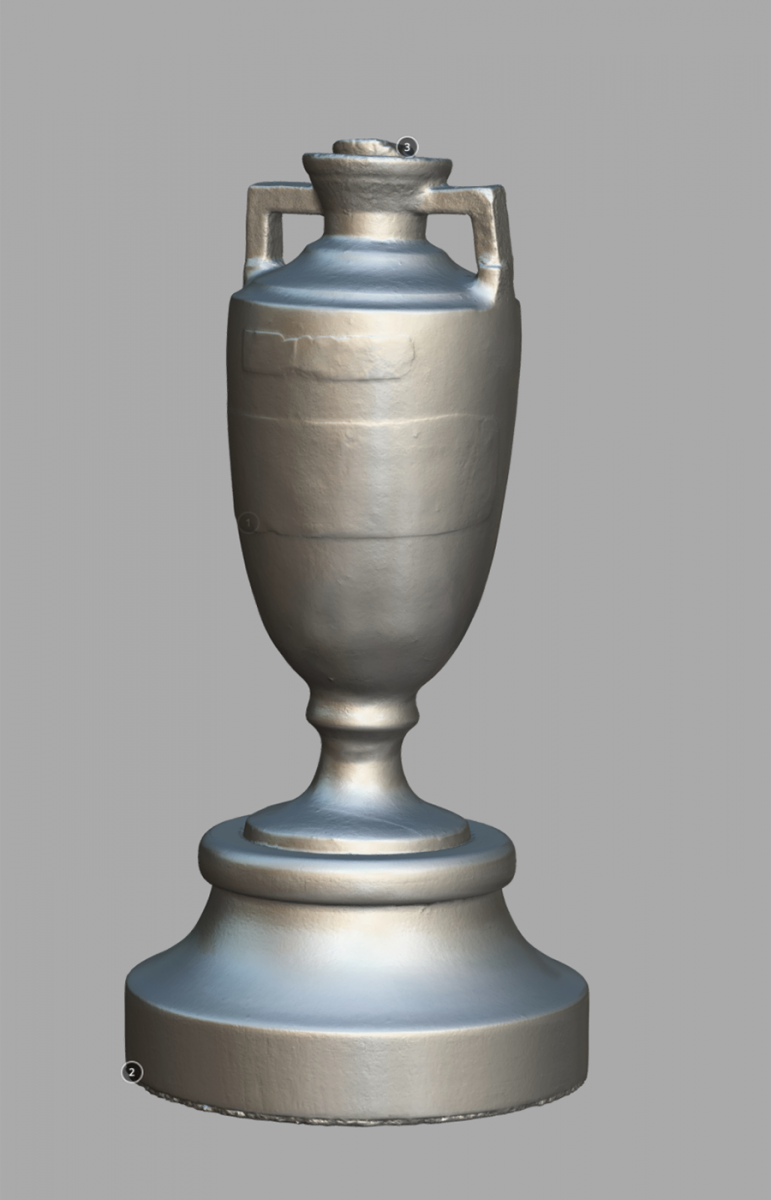 The completed surface of the 3D model, without its final surface mapping 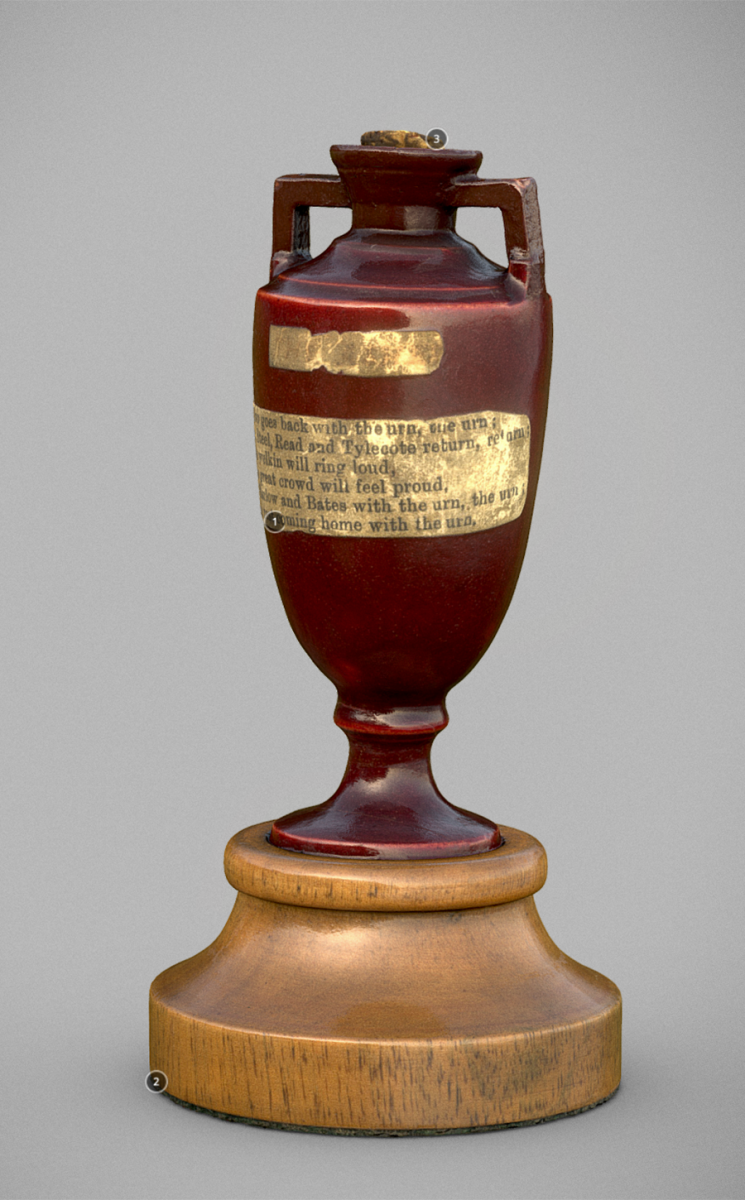 The completed 3D model of the urn, complete with its surface detail

To make the model widely accessible, we uploaded it to Sketchfab, a website where 3D, VR and AR content can be published and viewed.

Now cricket fans across the world can see the Ashes Urn in unprecedented detail.

The Ashes Urn
by The Postal Museum
on Sketchfab

The Home of Cricket

Known as ‘the Home of Cricket’, and owned by Marylebone Cricket Club, Lord’s Cricket Ground contains the world’s oldest sporting museum and library, where much of cricket’s history is preserved and documented.

The Ashes Urn forms a centrepiece of the museum and is arguably its most iconic object. To view it, visitors peer through a glass cabinet at the tiny urn, unable to touch it or see it up close.

Even the victorious team only ever handles replicas of the original urn. Instead, a specially made trophy is presented to the winners, while the original urn remains safely in the museum, revered as the embodiment of a sporting rivalry between two countries half-a-world away in distance, but closely united in history and friendship.

‘It gives cricket fans a new way to look at the Ashes Urn, and they won’t have to visit Lord’s to do so.’

‘We’re hoping that everyone who loves cricket will be interested in the project and [this will] be a great opportunity for us to share the Ashes urn and what it means.’

Since the digitisation, the Ashes Urn has now travelled to Australia and will be available to view at State Library Victoria in Melbourne at its Velvet, Iron, Ashes exhibition, between 26 November 2019 and 23 February 2020.