Nene Valley Railway are helping restore our Bag Exchange Apparatus. See how it worked - and hear a tragic tale of its danger...

Our Curatorial Department have recently been working with our friends at the Nene Valley Railway to restore our trackside Bag Exchange Apparatus, which will be going on display in Spring 2017. It is an extraordinary and ingenious construction that once received and despatched heavy leather pouches, containing mailbags, with a moving Travelling Post Office (TPO). 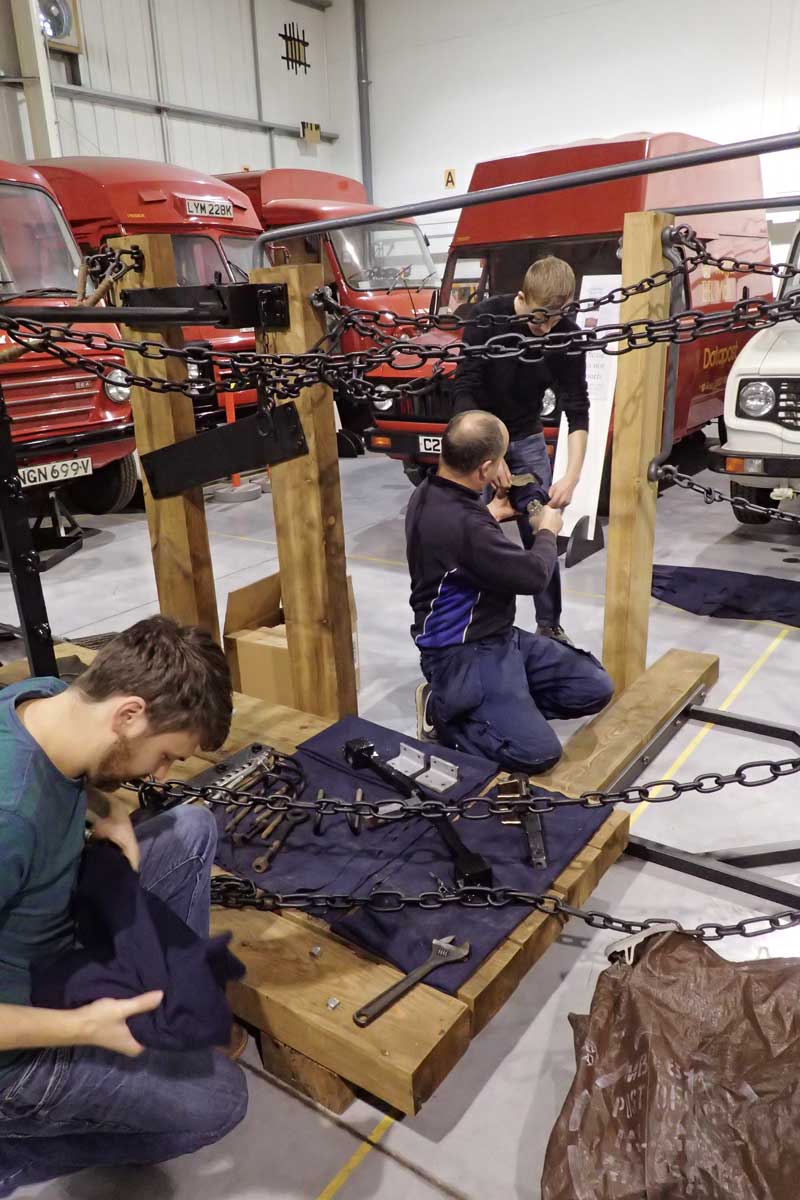 Experts from the Nene Valley Railway working on the Apparatus chains

The first transport of mail by rail took place in 1830, and it was not long before train and trackside apparatus had been introduced that meant the TPO did not have to stop when dropping off and picking up mail. A net was used to catch pouches of mail hung outside the TPO, and the train could collect bags of mail using a similar net attached to the outside of the carriage. 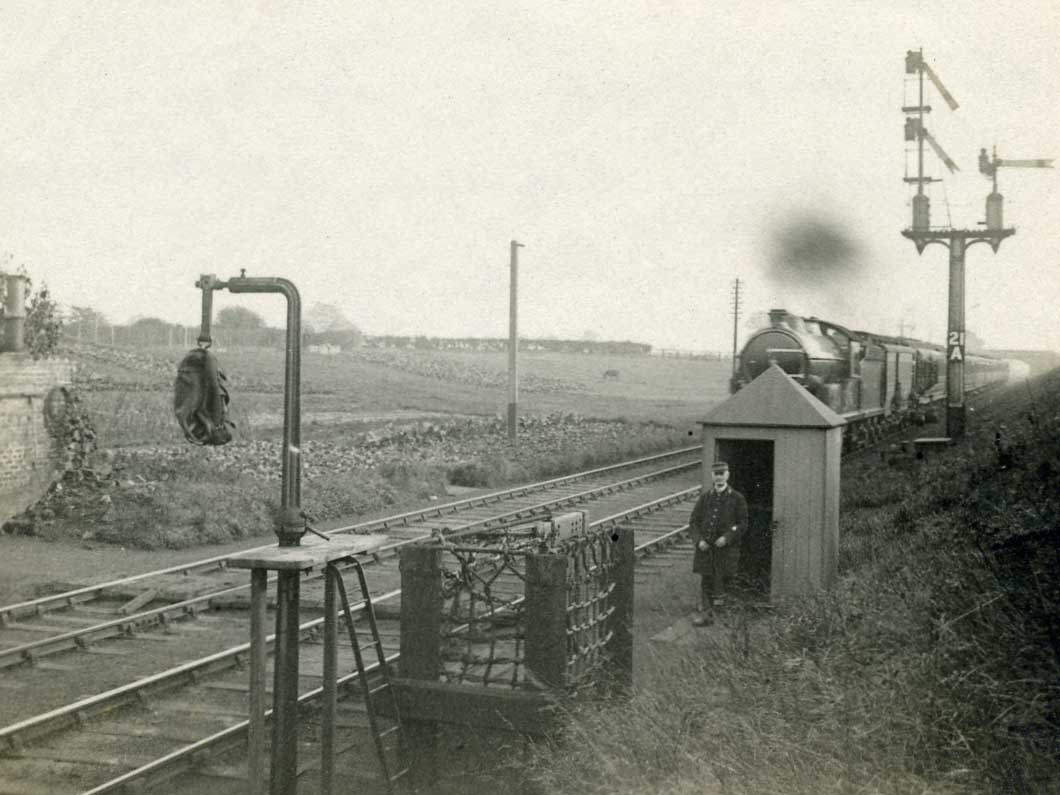 The GPO Film Unit’s celebrated 1936 film Night Mail gives a fantastic insight into how this worked in practice, showing the view from inside the train:

Following trials in 1837, the Bag Exchange system was formally adopted the following year. A peak was probably reached in 1913 when there were 245 exchange apparatus points across the UK. The final exchange took place in 1971 and the last TPO ran on the night of 9 January 2004.

Use of the apparatus was a skilled job. No one was allowed to operate the roadside apparatus unless first instructed in its working by the Apparatus Examiner. Due to the protruding nature of trainside apparatus and the hanging pouches, the possibility of accidents occurring was a very real danger. The net was not to be lowered or the pouches suspended for more than fifteen minutes before the Mail Train was due.

Night Mail also shows how this was done, from the trackside – and the potential danger is clear:

A particularly tragic accident occurred on Tuesday 14 September 1858. George Simmons, a Post Office Railway Messenger, was engaged to hang out the bags on the apparatus standard at Croydon Station. It was presumed later that he was a little late in his work and the London to Dover Down mail train came upon him whilst he was engaged in hanging up the mail bags:

“Not being able to get out of the way in time the projecting iron struck him on the head near the left ear, knocked him down and killed him instantly, the poor fellow having been found, directly after the train had passed, with no other wound than that by the ear. The bags were thrown out as usual and not far from where the deceased lay. The body was removed to the Railway Tavern, where an inquest will be held.”

The Royal Mail Archive can often provide a wealth of detail, and the details leading up to this accident are recorded. It was not the first time that Simmons had been late: a Post Office Minute from 6 February 1855 states that he had been reported for ‘want of punctuality’ in meeting the train. Any repetition ‘… would result in dismissal’. Again, on 24 August 1855, the unpunctuality of Simmons was reported: it was ‘… in this case … sufficient to caution the messenger.’

He was cautioned yet again, without suspension of pay, on 12 December 1857. However, Simmons was required to pay a fine of three shillings and sixpence. To put this fine into context, in 1858 his wages were 12 shillings a week (£31-5-8 per annum). 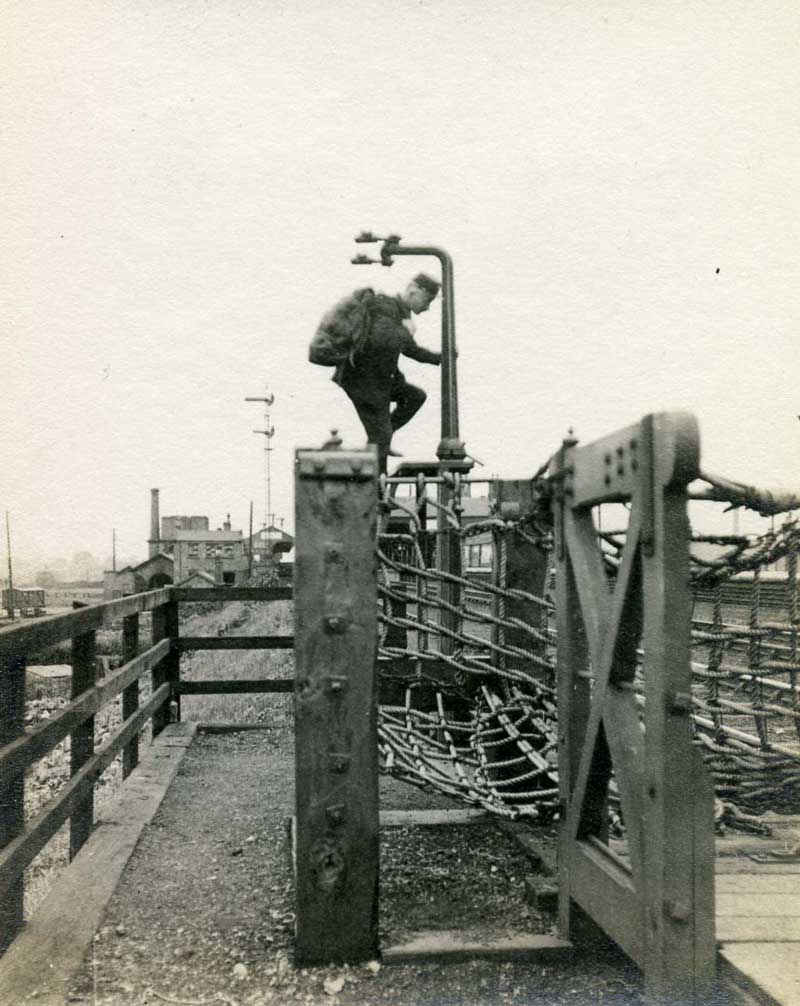 ‘Northallerton, Taking the pouch up the standard’

Simmons was not to get any more chances. He was killed in 1858, leaving a widow – Caroline Simmons – who applied to the Post Office for a gratuity (a payment for his death in service). There was a real possibility that this request may have been rejected, but it was noted that Simmons had been killed while in service and the Post Office itself recorded that Simmons had ‘served fourteen years … [and] uniformly conducted himself well’. A generous assessment in light of the problems in the preceding years.

Application was made by the Post Office to the Lords Commissioners of Her Majesties Treasury for a gratuity to be made to Mrs Simmons, her health also being recorded as infirm. Mrs Simmons herself was judged ‘an excellent character’. The Treasury granted authority for a gratuity of £20 pounds on 24 December 1858, for which Mrs Simmons was clearly grateful: she sent a letter of thanks to the Post Office twelve days later.